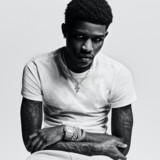 A natural talent, Quando Rondo was once a small child, secretly singing in the bathroom as a 9-year-old boy in Savannah, GA. His natural gravitation towards music lead to him to hip-hop; he began recording his fledgling verses on his cell phone. He quickly gained traction online, racking up millions of views on YouTube. “FROM THE NEIGHBORHOOD TO THE STAGE” is highlighted with his “Imperfect Flower” video and the hit single, “Scarred From Love,”. FTNTTS follows an incredible 2018 that saw Quando Rondo team with YoungBoy NBA for his acclaimed 4LOYALTY EP, highlighted by the RIAA Certified Gold hit video, “I Am Who They Say I Am (Feat. Kevin Gates And Quando Rondo),” now boasting over 40 million views. In addition, Quando released Life B4 Fame: The Documentary, a powerful short film chronicling his Savannah youth and young manhood.