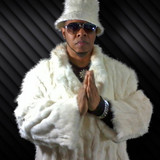 David Winfree is an American singer, songwriter, musician, producer, and talkbox artist. Born in Toledo, Ohio, Winfree has collaborated with artists from all around the globe including those from France, Japan, Ireland, Chile, and the Philippines. Winfree's big break came in 2002, when he wrote a song that was recorded by R&B Icon, Keith Sweat, titled, "One On One," for his "Rebirth" album. "One On One" was also featured on the soundtrack to the 2002 movie, "The Transporter."