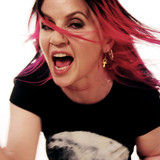 Leanne Kingwell hails from Australia’s live music capital, Melbourne. She bought her first guitar in high school and formed her first band while earning a degree in Graphic Arts at University. From Happy Gas Stare, through a record deal with Sugarlips to a successful solo career, she has been billed on major stages, national TV and international radio. She released her self-financed, predominantly self-penned, audacious debut solo album, 'Show Ya What' to great reviews. Chuck Eddy, then the Senior Editor of Billboard Magazine, put it in his 'Top Ten Albums of the Year'. As did writers from The Village Voice and more. To help realize her vision for her 2nd solo album 'Choking On Halos', Leanne teamed with LA based Music Producer David J Holman, who had recorded multi platinum acts No Doubt and Bush amongst others. The album was produced at his Cactus Studios in the Hollywood Hills. Album reviews touted: – “Every song is memorable.” – “Leanne is trailblazer, a true artist.” – “A modern masterpiece!” Augured by lyrics loaded in cinematic metaphor and emotionally intelligent musical layers, 'Choking On Halos' is an expertly crafted, easy-to-visualize 45 minute sonic mind-movie. It is a brave and original musical journey which celebrates true individuality, perseverance, loss, fragility, anger, redemption and joy. But, first and foremost, 'Choking On Halos' is testament to Leanne’s indefatigable passion for music and creative independence. https://leannekingwell.com