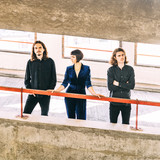 The Trials of Cato

Featuring The Trials of Cato

The remarkable rise of BBC Radio 2 award winning trio The Trials of Cato on the UK folk-scene has been the subject of massive critical attention. Dubbed "The Sex Pistols of folk,” (J Davis - Led Zeppelin, Gorrilaz) they pay clear homage to the tradition whilst twisting old bones into something febrile and modern, with stomping tunes and captivating stories.   “One of the real discoveries on the folk circuit in recent times” – Mark Radcliffe, BBC Radio 2   “Fascinating stuff” – Cerys Matthews, BBC 6 Music   “Swaggering… glossy results” – The Guardian   “One of the most impressive debut albums of the year - ★★★★” – Songlines   “A band name on everyone’s lips” – fRoots   “The Trials of Cato are about to hit the earth’s atmosphere with a bang, so sit back and enjoy the fireworks” – FRUK