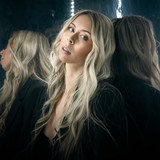 TYRA is back with her dreamy yet powerful new single 'Dream Girl' and takes the listener into a world full of contradictions. In collaboration with producer Ulrich Hilbel, TYRA created a song that is about illusions and false dream worlds in which you can lose yourself if you fall in love with someone who ,unfortunately, hides a second face. Dreamy guitar play and a melancholic melody stand in contrast to modern beats and give the song a very special feeling - We have never heard something like this before from TYRA and the title proves that the talent from Luxembourg has grown up. DJ / producer Thomas Godel is responsible for the following remix, who gave “Dream Girl” a summery club note and created a nice alternative to the original version. The 25-year-old musician proves with “Dream Girl” again passionately and with a lot of will to grow in and with her songs in composition and lyrics. The still young career can already look back on great successes, for example through airplay in meanwhile 16 countries, 6-digit streaming numbers and the first large Spotify playlists ("Weekend", "Discover Weekly") as well as ten thousands of views on YouTube. In her home country, with any new release, Tyra seems to book the place in the chart sun regularly in the iTunes charts and has been blessed with many beautiful club placements since the start of her career (club chart successes in England, Germany, France, Denmark).