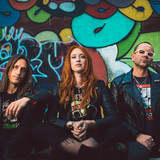 Portland, Oregon's "Hippie Death Cult" and their unique brand of heavy rock n' roll have managed to ignite a noteworthy buzz in the worldwide heavy music community since their inception in early 2018. They have performed alongside some of the West Coast's hottest acts and have amassed a diverse and loyal fan base that spans the globe. In 2018 the band signed with Cursed Tongue Records, who released their debut album "111" which topped the Doom Charts at #1.

2020 found HDC in a remarkably productive place. They completed material for MER's - "Best Of Black Sabbath Compilation" and signed with Heavy Psych Sounds Records to release "Doom Sessions Vol 5" and their sophomore album release "Circle Of Days" in 2021. Hippie Death Cult is one of the freshest, most vibrant bands to come out of Portland in quite some while." Give ear... -BillyGoat (Doomed & Stoned) “111 is the sort of statement that I think many bands wish they could unleash as an opening salvo” - Matt Bacon (Dropout Media) “A flawless debut album you have to dive into! Album of the year? I think so!!!” ~Marc-Eric Gagnon (Doom Charts/Stonefly Effects) This is Modern Heavy Rock music of the very Highest Order that just has enough of that nostalgic feel to be familiar. A Triumph! - Reek of STOOM “These are simply just well-crafted songs played by excellent musicians. 111 is an album where everything just falls perfectly into place. This is highly addictive and a contester of the album of the year.” - Orange Maze