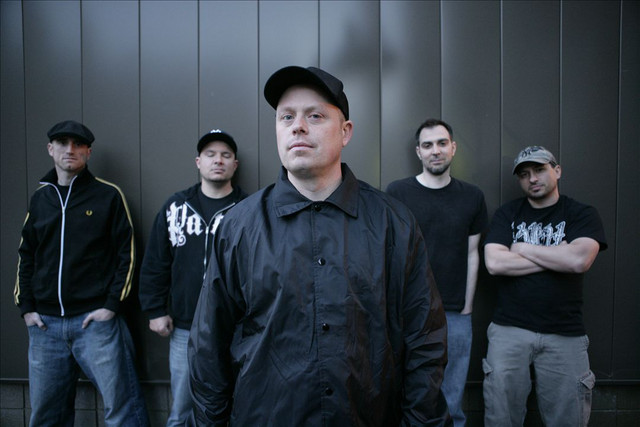 Earth Crisis' chugging riffs and barked declarations served as the mouthpiece of America's militant vegan straight-edge movement throughout the '90s, detailing the ideas of animal and human liberation, drug-free living, and personal empowerment through hardcore song. The vegan straight-edge movement spawned activists who took the law into their own hands, burning down fur farms and freeing animals directly. Earth Crisis began as the brainchild of Karl Buechner -- who intended to play bass -- and his friend DJ Rose. The lineup eventually solidified with Buechner on vocals, Ian "Bulldog" Edwards on bass, guitarist Scott Crouse, drummer Mike Ricardi, and a guitarist named Ben. This lineup began playing around Syracuse, spreading the message of veganism and the drug-free lifestyle previously preached in the hardcore scene by Vegan Reich, Statement, and Raid. Earth Crisis crafted a five-song demo and sent it to the label that had released those bands' records, Hardline. But with that label on hiatus, they decided to release their first EP through a local friend's imprint, Conviction. All Out War came out on 7" single format, with the band embarking upon their first U.S. tour in support of it. Drummer Dennis Merrick -- who would become almost as important in shaping the band's political ideology as Buechner -- came aboard around this time as Ricardi was unable to commit himself to touring. The interest that built up in the hardcore scene around the band, along with a new demo, brought Earth Crisis to the attention of Chicago's Victory label and a deal was signed. Earth Crisis set about making their first EP for the label; Firestorm was a landmark release for the hardcore scene that combined staccato, solo-free metal with barking, political, and militant vocals. The lyrics centered around the dangers of drug abuse and bringing "violence against violence" to drug dealers and those who would abuse animals: "a firestorm to purify." The Earth Crisis phenomenon was now in full swing, but Ben was asked to leave the band and was replaced by guitarist Kris Weichman. The group next crafted their debut full-length album, Destroy the Machines, which was released in 1995. Victory also secured the rights to All Out War, reissuing it on CD, 7", and cassette format. The band traveled to Europe, where they were amassing quite a dedicated following. Earth Crisis set about touring the States again as well, first with Guilt, Ignite, and Damnation AD and next supporting Shelter. While on tour in the northwestern United States, they were involved in a serious van crash that hospitalized Merrick for some time. While home recuperating, the rest of the group -- together with Rose, Ricardi, and another friend -- made a project album under the moniker Path of Resistance as Earth Crisis popularity began to increase. Major media outlets such as MTV, CNN, and CBS started covering Earth Crisis and vegan straight-edge in general. In 1996, the band released their second full-length album, Gomorrah's Season Ends, a polished and decidedly more metallic affair that produced even more anthems that became singalong worthy staples of their live performances. Though Victory was growing in size alongside the band, offers from bigger, more established and more widely distributed labels began to pour in. The band was asked to take part in the inaugural Ozzfest. Earth Crisis released a live album, The Oath That Keeps Me Free, through Victory and then signed a contract with then-indie metal giant Roadrunner Records, home to acts such as Fear Factory and Sepultura. They also fired Weichman, replacing him with Edwards' brother Erick, late of the band Beta Minus Mechanic. Their first and only album for the label, Breed the Killers, was released simultaneously on vinyl through Equal Vision. It was solid, with production by Andy Sneep and a guest vocal appearance by Machine Head frontman Robb Flynn. Earth Crisis toured relentlessly behind the record, but it failed to generate much more of a buzz than any of their previous releases had already. With dissatisfaction mounting on both sides, Earth Crisis severed ties with Roadrunner and returned "home" to Victory. What followed was perhaps the best work of their career, the decidedly nu metal flavored Slither. Its incredibly well produced, structured, and catchy songs included singing, rapping, and more obtuse and personally oriented lyrics. It was tantamount to a massive "sell-out" to many fans, however, and poor turnouts at subsequent tour stops reflected this. Earth Crisis' next release was a collection of demo, rare, and cover tracks called Last of the Sane. In 2001, they announced their breakup, playing a triumphant final performance at Hellfest in their hometown of Syracuse. A DVD and best-of collection were released soon after. Buechner formed a new band called Nemesis, while Crouse and Merrick teamed up in a progressive, heavy rock group named Slave One. The band reconvened in 2007 for what was originally intended to be a one-off performance, but the fates aligned and by 2008 Earth Crisis had signed a worldwide deal with Century Media. The following year saw the release of their hotly anticipated sixth studio long-player, To the Death, followed by a massive tour of North America and Europe. Showing no signs of slowing down, the band released LP number seven, Neutralize the Threat, in 2011, with the animal rights-themed Salvation of Innocents dropping in 2014. ~ Ryan J. Downey, Rovi