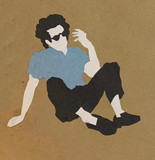 Break-ups, social-media addiction, twirling in circles, and chasing the night-life... these are premises of songs by Marvel Prone—a psychedelic rock outfit hailing from University of New Hampshire.    Marvel Prone formed in 2014 as a high-school cover band (originally known as DAVE). In 2015, the band aired "Nocturnal Life" (their first single) on the popular Boston alternative radio station 92.5 FM "The River". In 2016, just a year out of high-school, Marvel Prone released their debut album "Moonlightning".   The band has its influence from the psych-rock of the 1960's (such as Jimi Hendrix and Pink Floyd), the grunge and alt-rock of the 1990's (such as Nirvana and Radiohead), and the contemporary rock of the 2000's and early 2010's (such as The White Stripes and Tame Impala).   The band-name suggests that the members of the band are consumed by their fascination with the surrounding world, their own minds, and the mysteries that comprise existence--to the extent that it vexes them on their endeavors through a civilized and rapidly-moving society.   Don’t miss they’re latest single “Last May” from their upcoming album “She Hits Me”, which will be released on May 1st.