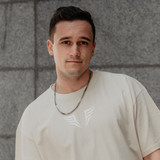 Fabian Farell is a German DJ and music producer from Krefeld. The years before Corona, he took off internationally within a very short period of time with his shows, where he used his unique ability to to captivate the audience, through What had started in 2015 in the small clubs around the corner, led continued in 2019 on the mainstage of the New Horizons Festival 40 000 visitors) and first performances in Asia. Through Corona, Fabian Farell has been drawn more and more to the studio, as he has had more time to work on his own music. Among others, he has been releasing his music on major labels like Sony Music or Kontor Records since 2019. His most successful single till now, "Against The Rest," achieved nationwide rotation on numerous radio stations and so far over 25 million streams on all platforms. Earlier this year he worked for his first project in 2021 together with RTL 2 and Warner on a remix for the single "Bad One" by Leonade. Collaborations with major artists are planned for 2021.