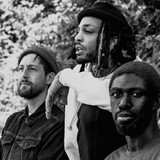 Melding elements of rap, rock, R&B, and funk into one cohesive and melodic sound, upstate New York's Gym Class Heroes have diverse appeal based on their impressive musical dexterity. Often touring with indie rock and pop-punk bands, they don't fit comfortably into one specific genre; the quartet's music is rooted in traditional hip-hop, but features live instruments instead of looped samples or beats. Lyrics are often socially conscious, but also incorporate humor and wry perceptiveness. The band's roots date to 1997 in Geneva, New York, when MC Travie McCoy and drummer Matt McGinley became friends during high-school gym class. Wanting to create a new palette for hip-hop, the duo worked with other musicians before Gym Class Heroes were officially born in 2001 with the addition of guitarist Milo Bonacci and bassist Ryan Geise. The guys self-released ...For the Kids that same year. Touring nonstop, they recorded The Papercut Chronicles in 2003, which caught the attention of Fall Out Boy's Pete Wentz before it was even finished. The Heroes were officially signed to his Fueled by Ramen imprint, Decaydance, by September 2004, at which point Bonacci was replaced by guitarist Disashi Lumumba-Kasongo. The four-song teaser The Papercut EP preceded the eventual February 2005 release of The Papercut Chronicles, with Eric Roberts replacing Geise on bass. The quartet hit the road hard, spending spring on dates with Midtown, Fall Out Boy, and the Academy Is..., along with hitting the year's SXSW, Bamboozle, and Warped Tour festivals. They also spent part of the summer opening for ska-punks Streetlight Manifesto. A Red Hot Chili Peppers cover song was donated to Fearless' Punk Goes 90s compilation before their follow-up was issued in July 2006. As Cruel as School Children was produced by S*A*M (Method Man, the Sounds) and Sluggo (aka session bassist Dave Katz) and co-produced by Fall Out Boy vocalist Patrick Stump. The album included various guest appearances, including the Academy Is...'s William Beckett and Arrested Development's Speech. They spent that summer supporting the record on the Warped Tour. Gym Class Heroes' profile notably increased at the year's end with the release of the single Cupid's Chokehold/Breakfast in America, which hit number four on Billboard's Hot 100 and remained in constant rotation on radio and MTV during the spring of 2007. After headlining a seven-week U.S. tour called the Daryl Hall for President Tour '07, the group returned to the studio to record The Quilt in 2008, which included guest appearances by Lil Wayne, Busta Rhymes, and Daryl Hall himself. Afterwards, the band took some time to pursue other side projects, with McCoy releasing his solo album Lazarus and McGinley drumming for Kill the Frontman. In 2011, Gym Class Heroes came back together with the release of Papercut Chronicles II, a sequel to their 2003 label debut. ~ Corey Apar, Rovi