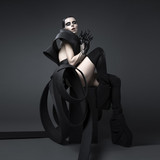 Avant-Garde, mystical and magical are just some of the ways her fans describe KERLI’s music. As Estonia’s most successful music export, this unique artist has defied genre and created a musical world all her own; an eclectic style , drawing on a wide range of influences such as electronic, pop, goth, and experimental. Her debut album, "Love Is Dead", in 2008 which charted on the Billboard 200. The lead single, "Walking on Air," was featured as the iTunes single of the week where it was downloaded over 500,000 times, a record at that time. ​ Her 2nd album Utopia also charted on Billboard 200. Singles "Army of Love",

Zero Gravity", and "The Lucky Ones" entered the top 10 Billboard Hot Dance, two of them peaking at number 1. A song co-written by KERLI for Utopia, "Skyscraper" was recorded by Demi Lovato and become one of Demi’s biggest hits. ​ In 2016, she released 3 independent singles, while teaming up with the government of Estonia to art direct a tourism campaign designed to promote the otherworldly nature of her country. ​ Spending most of her creative time in the deep forests of Estonia, KERLI’s evolution as an artist has paralleled her curiosity as a human, exploring the relationship between nature, mysticism and technology. All of which will be part of her most diverse and eclectic body of work on an upcoming album, titled ‘Shadow Works’, set to release in Feb 2019 on MrSuicideSheep's imprint Seeking Blue.