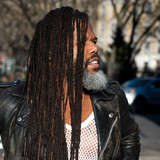 Queens NY native + 2 x Grammy winner Casey Benjamin is a Caribbean-American Saxophonist, Vocoderist, Keyboardist, Producer,Vocalist, Songwriter, and DJ (aka Stutz McGee). He is a founding member of the Robert Glasper Experiment which won Grammy awards in 2012 & 2014. Casey is one half of the funk pop new wave duo HEAVy with vocalist Nicky Guiland and remains a constant collaborator with a number of great artists such as Stefon Harris, Q-Tip, and many more.