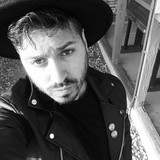 Vacances was forged by singer Danny Lannon in 2015 out of the ashes of his previous West Coast project, The Frail. With production help from Alex Fitts (The Kickdrums) on new material, Lannon decided to leave San Francisco for New York in order to pursue Vacances. Lannon released his first single “Runaway” to stellar reviews from EarMilk, Examiner, and AV Club and followed up with his viral hit ‘Never Give Up’ which has racked up hundreds of thousands of streams. Vacances will be releasing a string of singles culminating in an EP in 2018 supported by regional tours in the US. Vacances Has Been Featured On: Earmilk, AV Club, Line Of Best Fit, Examiner, Pure Volume, Much Music, CMC, Spotify, Apple Music and more.