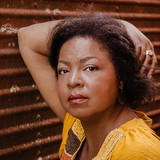 Canadian folk-roots musician Tania Joy has been using the last few years to hone her songwriting, finally following up her 2013 EP, I’ll Be Around, with four singles released in 2021 leading up to her new EP I Will Stand, produced by Hill Kourkoutis (Digging Roots, Leela Gilday, Madison Violet), a multi-talented artist who played with Serena Ryder and was in The Weeknd’s original backing band. Her stories, so far, have been about relationships, in all of their complicated forms. However, during the pandemic, Tania found herself taking on a more complex narrative as the world around her shifted, bringing increased and global attention to Black Lives Matter. With mentorship from Hillside’s Girl and Guitars program, Tania wrote her first protest song, an acoustic reflection “Planks and Marietta,” which was released during Black History Month. Tania’s has since released, “The Drought,” a moseying country-soul musing on the loss of love, “Blink,” a melancholy but intense song about tough choices and revisionist memories, and her latest single "Who I Am" is a rootsy anthem about naming those unspoken fears that make us who we are, embracing them, and pushing past them. Both "Planks and Marietta" and "The Drought" won Tania Joy a 2021 OMA (Oshawa Music Award) for Songwriter of the Year, while "Planks and Marietta" was also nominated for Durham Song of The Year.