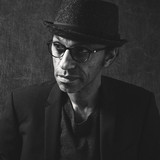 Manu Katché was born in Paris, in 1958, though his family roots go back to Africa’s Ivory Coast. He studied piano from the age of 5, switching to drums at 14 and studying classical percussion at the Conservatoire National Supérieure de Musique de Paris. He has often said that his drum style is essentially an amalgam of African rhythm concepts and classical drumming, illuminated by the in-the-moment interaction of jazz. His distinctive drum style is derived from classical snare drum and kettledrum studies as well as from a conscious embracing of African roots. His work with Peter Gabriel on the album “So” and, subsequently on the Amnesty International World tour with Gabriel, Sting and Tracey Chapman catapulted him to world attention and he was soon recording and/or touring with Joni Mitchell, Robbie Robertson, Dire Straits, Simple Minds, Youssou N’Dour, Joan Armatrading, Joe Satriani and dozens more. His ECM affiliations include recordings with Jan Garbarek, amongst them: I Took Up The Runes, Twelve Moons, Visible World, In Praise of Dreams, and the live album Dresden. Katché’s first leader date for the label, “Neighbourhood”, was recorded in 2004, with “Playground” following in 2007, “Third Round” in 2010, “Manu Katché” in 2012. His last album “Unstatic” has been released with Anteprima Productions in 2016.