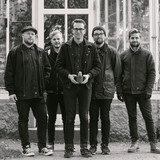 According to Urban Dictionary, Dingus means: "A person who is exceptionally goofy or awkward in nature, but in an endearing and lovable way". Dingus is also a young americana band from Drammen. Inspired by the likes of Steve Earle, Jason Molina, Lucinda Williams, Townes van Zandt and Wilco, Dingus takes place in a melancholic environment while still embracing a sympathetic appearance. The band's debut single was released on Safe &amp; Sound Recordings in November 2014, followed quickly by a series of singles, including their alt-country take on the British boy band One Direction's "Fireproof" accompanied by the omnipresent Alexander Lindbäck (Seven Doors Hotel, St. Thomas, Jayhawks). Dingus released their eponymous debut album in November, 2016. The album received good reviews, from amongst others, Dust of Daylight, writing: "Dingus is an album we cannot ignore when we soon wrap ut the year. Not only a superb debut album, but for my part, this will be one of the best records or the year".