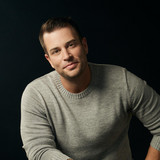 A Florida-raised, Oregon-based CCM artist, Jonny Diaz's easygoing acoustic pop style has drawn comparisons to artists like Brandon Heath, John Mayer, Dave Barnes, and Bebo Norman. A star baseball player from a family spilling over with big league talent -- brother Matt is a major leaguer -- Diaz was offered a full athletic scholarship to Florida State University. After playing for a year, he felt his calling shift from the field to the stage, and in August 2003, he released his debut album, Shades of White, independently. Subsequent LPs Everyday God and They Need Love were also issued independently, but that would change in 2009 with the release of the chart-topping More Beautiful You, which arrived via Sony imprint INO Records. The eponymous Jonny Diaz dropped two years later, and in 2014 he released his much-anticipated third major-label offering, Let It Fly, this time via Centricity Music. The Chad Copelin-produced EP Everything Is Changing arrived the following year. In 2017, Diaz returned with the single "Whole World." ~ James Christopher Monger