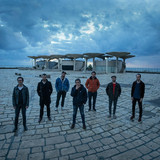 Rock’N’Roll from the Soul of Tel Aviv. After releasing its second album on Acid Jazz Records, the band was invited to record a live session for Craig Charles on BBC Radio 6 (chosen by the station as one of the best live sessions of the year), flew out to Moscow and Germany, and went on to fill London’s O2 Academy Islington and play the Madness House of Fun weekender. The group that has been described as “basically Soul with influences of Mod 79 sounds and Punk 77 music”, lived up to the expectations with its sophomore effort for the London based record label. This rock’n‘soul modish music has emerged from the Bauhaus architecture of Tel Aviv and from a thousand influences, most of them unexpected. 12 tracks infuse Northern Soul, Post-Punk and Rock'N'Roll into heady visions of the city’s buildings, streets, bedrooms, clubs and bars, while remaining dedicated to MONC’s brass section extravaganza and their firm belief in the power of a

great pop song. It’s the work of a small collective of music fans in a culturally diverse city.