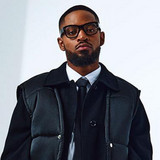 Spurred on by the phenomenal success of Charlotte, his hit single featuring Lady Zamar, dance music star DJ Prince Kaybee is turbo charged to take on the world. After dominating the local music circuit and performing on some of the most prestigious stages, the ambitious Prince Kaybee dreams of bigger things with the release of his second album I Am Music. But the multi award winning music genius almost missed this turn in his career. ‘I didn’t believe in Charlotte when we recorded it, although it was a dope creative process, Lady Zamar wrote it in 40 minutes and the whole process lasted an hour. But it was not my typical sound, in fact it sounded too international. And now how the song just caught fire and dominated the charts was all the convincing and validation I needed to pursue this new direction in my sound.’ Charlotte propelled Prince Kaybee into a special league of dance stars. It has taken him all over South Africa and the UK where he had his Better Days Tour and had revellers at his mercy begging for me. The song picked up the prestigious Mzansi Viewers Choice Awards for Song of the Year. All signs have pointed to a new trajectory for the music man from Botshabelo in the Free State.