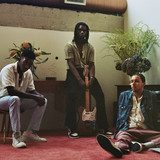 Your Grandparents make music that hints to the nostalgia of previous decades without feeling dated. The Los Angeles born and raised trio, composed of producer ghettoblasterman and vocalists DaCosta and Jean Carter, isn’t cemented to just one genre, either. The friends founded Your Grandparents, using the moniker as a nod to the elders who introduced them to classic artists and inspired their musical tastes, in 2014. Originally, the trio released rap music, but their work quickly grew to incorporate the various genres that have inspired their musicianship. When asked about the albums that have inspired them lately, the men rattle off a variety of projects including D’Angelo’s Voodoo, Erykah Badu’s Baduism, The Fuugees’ The Score and Pink Floyd’s The Dark Side of the Moon. Today, Your Grandparents release music that nods to funk, soul, hip-hop, rock, blues and other genres.Words by Jewel Wicker