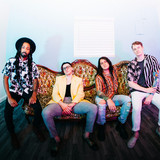 "Alura" derives from the 1940s comedy "She Wouldn't Say Yes." It was the name of a woman who was both a sociopath and a temptress who could not keep men from pursuing her. The group decided this name was perfect representation of the alluring sound of the music being created. It comes from a variety of influences that emulate the intense aggression of Slipknot, Ill Nino and Korn mixed with the beautiful melody of bands like Deftones and Thrice.   Formerly known as We Gave It Hell, this 4 piece hard rock and metal outfit based out of Las Vegas, NV quickly flourished in the diverse & chaotic music scene. The band toured most of the US, a portion of Canada, & played shows with some of the biggest bands in rock/metal in the world. After holding the name We Gave It Hell for 7 years, the 4 decided it was time to start anew.   Their first single "Counterfeit" is a crushing, riff-driven metal anthem about how fake everyone portrays themselves to be on the internet. Since it's release in July 2019, the song has accumulated over 200,000 streams across all platforms. Alura released 3 more singles entitled, "Disciple," "Stuck," & most recently, "Belize."   With several local Vegas shows and shows in Colorado, Texas, Arizona and California under their belts, the band has every intention of getting anyone and everyone to learn about the infectious sound of Alura.   Instagram: @alurasounds Twitter: @aluraband Facebook.com/Alura sounds For all sync & licensing inquiries: aluralv@yahoo.com