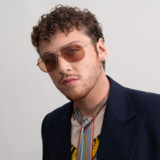 Bazzi is a multi-platinum certified singer-songwriter-producer who is back and ready to make his mark on 2021 and beyond. New fresh tracks like the soul-grooving single, “I Like That,” mark the launch of a bold new era for the chart-topping pop phenomenon alive with raw sensuality, creative energy, and ever-increasing confidence. Born to a Lebanese immigrant father and American mother in Canton, MI, Bazzi and his dad moved to California during his senior year where he single-handedly wrote and produced a series of viral smashes like “Alone” and “Beautiful,” earning millions of streams. Now with over 1.7B streams to date, 2018’s 5x RIAA platinum certified “Mine” proved Bazzi’s true breakthrough. Bazzi has been praised by Playboy for his “genre-bending…warts-and-all approach to songwriting." Bazzi’s RIAA platinum certified debut album, COSMIC features the 4x platinum certified, “Beautiful (Ft. Camila Cabello).” In 2019, Bazzi unveiled his first mixtape, SOUL SEARCHING, collecting RIAA platinum certified singles as “I.F.L.Y.” and “Paradise.” Hailed by Billboard as “his most personal work to date,” while “Paradise” proved one of Bazzi’s biggest hits with more than TK global streams. Now fully focused on the future, Bazzi is hard at work writing and recording new music, as always cross-pollinating modern pop with more traditional aspects of craft and performance. Brimming with self-assurance, artistic vision, and a seemingly infinite songbook, Bazzi is set to take on the world.