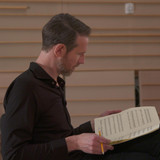 James Sizemore is a composer, arranger, and producer with notable credits in film and television. James’ music ranges from the additional music in the family film A Dog’s Purpose, to adding string arrangements to M Night Shamylan’s dark film Split. James arranged and produced the score for the award winning film Spotlight. Previously James spent 3 years working with director Peter Jackson and composer Howard Shore, orchestrating and arranging the music for The Hobbit Trilogy. With a versatile background in many musical styles, he has ranged from the big broadway musical numbers written for OJ:The Musical

to the ambient soundscapes heard in David Cronenberg’s films Maps to the Stars and Cosmopolis. His versatility can also be heard in Jon Stewart’s film Rosewater, where ethnic Persian soloists intermingle with hip-hop and rock influences. James' more personal musical aesthetic can be heard in his solo work, both in his debut album Frameworks (2018) and his upcoming album While Being (2020). Both of these albums feature his chamber works for piano and string quartet and focus on beautiful instruments played by exceptional musicians and recorded with vintage recording technology. James has served on the faculty of New York University and the City University of New York, teaching classes on film sound and music. He lives in the Hudson Valley, NY with his wife and daughters.