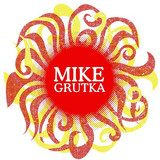 At the album’s emotional center are closers "Painting the Silence” and "See the Light" two songs that find Grutka finding the hope we all search for in life. This reflective tone serves as counterpoint to the rest of the disc: The themes of betrayal and broken trust "Fallen" to the huge chorus hook of “Hey Hey" much of "Painting the Silence Vol.1" maintains an easygoing, acoustic-flavored feel. Narrowed down from roughly 80, the 10 songs that made the cut find playful blasts of electronica swirling together with Grutka’s melodious, acoustic-based pop-rock. Many of the album’s songs are constructed around expansive, layered vocal arrangements, particularly the lush “Winter Song,” the British Invasion head-bopper “Eyes to the Sky,” and the single “Running Away.” The latter’s chiming electric guitars and breezy flow recall vintage R.E.M., as does Grutka’s disarming tenor, oftentimes a dead ringer for Michael Stipe. Find your hope. As he sings in album closer "See the Light", "All the worries in your life/Let them go" Mike Grutka will sing his life for you if you care to listen. And when you hear his music, you’ll sing too.