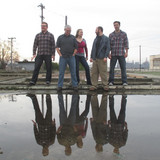 Wheel House is a California-based band that plays a dirty concoction of rock, blues, and funk, harkening back to the sound of the 60s and 70s. Featuring both a male and female lead singer, Wheel House is highly versatile and delivers powerful live performances and unfiltered studio recordings. "Exit" is their newest single, written and recorded in isolation during the early months of the COVID-19 pandemic with the band members spread out across four cities. It's a departure from their vintage, live sound, with a haunting feel and a touch of psychedelia. Wheel House was formed in 2010 in Orange, California by founding members Mandy Burke (vocals, keys, guitar, percussion), Pete Vander Pluym (vocals, drums, bass, keys), Garrett Calcaterra (guitar, bass), and Eric Tryon (bass, drums). The name of the band, Wheel House, was chosen to describe their penchant for rotating on instruments from song to song. In 2015, most of the band relocated to the Bay Area, where they now play most frequently. In 2017, the band added Jeremy Quinn (drums, bass, guitar) to the lineup to round out their sound and provide more versatility to their rotations. www.wheelhousesongs.com