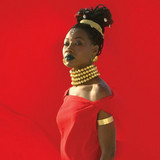 Fatoumata Diawara will release her new album ‘Fenfo’, which translates as ‘something to say’, through Wagram/Montuno on 25th May. The follow-up to Diawara’s widely acclaimed debut ‘Fatou’, the album was co-produced by Diawara and Matthieu Chedid (better known by his stage name -M-) and recorded in Mali, Burkina Faso, Barcelona and Paris. Diawara, who will play a sold out date at London’s Jazz Café on 26th March, will unveil ‘Nterini’ (which means ‘my love/confidant’), the first single to be taken from ‘Fenfo’ on 8th March. The ‘Nterini’ video, directed by Ethiopian photographer and contemporary artist Aïda Muluneh, will appear on streaming services on 9th March. As Fatoumata explains, ‘Nterini’ is a song about the heartache felt by two lovers separated by distance. My love and my confidant has gone far away and has not sent any news back to me. I love him despite everything and I miss him every day. I want to hear from my darling; otherwise I cannot sleep well at night.” Hailed as one of the most vital standard-bearers of modern African music, Fatoumata Diawara takes her artistry to fresh and thrilling heights on her new album ‘Fenfo’. Boldly experimental yet respectful of her roots, it’s a record that defines her as the voice of young African womanhood – proud of her heritage but with a vision that looks confidently to the future and a message that is universal. “Fenfo’ expresses how I feel and how I want to sound,” Fatoumata says. “It’s a record that says who I am.”