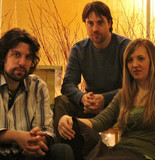 There’s a restless spirit flowing through the North Country that’s hard to define, and sometimes a good song is the only way to put it into proper perspective. The May North has a rare knack for doing just that—making sense of love, loss, long winters, longer highways and the shifting lines between urban and country living. With a sound that’s part folk, part bluegrass and a bit of breakneck blues, The May North pays tribute to these forms while carving its own path. The band is careful not to define themselves as strictly “bluegrass” as the music finds its influences, lyrics, and keys deviate away from the norms of the genre. However, they do employ the time-honored instruments of acoustic guitars, banjo, dobro and fiddle to create an earthy and intricately-woven soundscape. This is bluegrass without boundaries, folk without pretense, honest storytelling without apology.