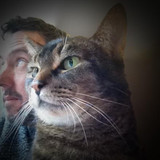 Pete Roberts has been making music under the name Alpha Seven since the mid 1990s. A decade earlier, he was in Testcard F, Norwich-based experimental synth pop pioneers whose instruments included electronic percussion built from Maplin kits, a borrowed EDP Wasp, waste bins and a 1960s Farfisa organ.

This experimental/DIY ethos persisted when he started performing under the name Alpha Seven. He lived in Norwich at the time and was one half of the ambient SOFA club night along with DJ Reg Tubby. SOFA featured local artists, ambient, chill out, easy listening, field recordings and spooky soundscapes. His first release in 1997 entitled Great Lift Journeys of Norwich was a mix of styles, but very much the kind of thing you’d hear at the SOFA club.