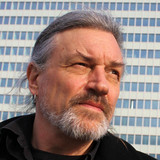 Marty Willson-Piper is best known for his tenure as a lead guitarist, singer/songwriter and occasional bass player with disparate acts - the church (“Under The Milky Way”), All About Eve, later Seeing Stars and The Saints, covering Psychedelia, Goth and Punk. As a songwriter, he has written songs for and with Charlie Sexton - Bob Dylan's guitarist, Aimee Mann, Jules Shear, Linda Perry, Grace Slick, and Brix Smith. He's been touring with Swedish Progressive Rock band Anekdoten all over Europe, Japan and Armenia. In November 2019 Willson-Piper joined The Wild Swans in the studio. A collaboration with Tangerine Dream's Jerome Froese is in its final stages. Brought up close to Liverpool in England, his influences have made him a prolific writer, covering even more genres with a slew of solo albums as lead singer and guitarist, and singer/lyricist with other eclectic projects, including four albums with English duo Noctorum and two albums with Swedish band MOAT, their second album Poison Stream OUT NOW! In 2019 Willson-Piper released an instrumental album as member of Atlantaeum Flood called One Day.