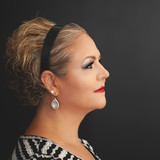 “Musical storytelling to inspire and excite the imagination”… Michele McLaughlin is a self-taught Contemporary Solo Pianist & Composer. She has released 21 albums and several singles, many of which have received multiple nominations and awards. Her albums, Undercurrent, Life and Memoirs, debuted at #5, #7 and #4 on the New Age Billboard Charts.

She has been featured in Rolling Stone Magazine and has over 1.5 Billion spins across multiple platforms. “McLaughlin is what I refer to as a “heart on her sleeve” composer, i.e. there is no subterfuge, no subtlety at work in her music – she presents her emotional intent of a song forthwith and front and center. It’s a testament to her considerable talent that this baring of her soul always works so well, because in the hands of a lesser talent, the music would be melodramatic, overly self-conscious, and would grow tiresome. However, it’s not just her technique and artistry, which is impossible to ignore, but also her artist’s soul, which seems woven into every piece of music she writes. No matter how pyrotechnic she can be (and this woman can really play piano with the best of ’em), there is always the presence of heart, sometimes “in your face” and sometimes between the lines, but never hidden behind artifice.” Bill Binkelman – Wind & Wire and Zone Music Reporter