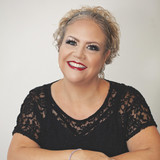 “Musical storytelling to inspire and excite the imagination”… Michele McLaughlin is a self-taught Contemporary Solo Pianist & Composer. She has released 20 albums and several singles, many of which have received multiple nominations and awards. Her most recent albums, Undercurrent, Life and Memoirs, debuted at #5, #7 and #4 on the New Age Billboard Charts.

She has been featured in Rolling Stone Magazine and has over 1 Billion spins across multiple platforms.