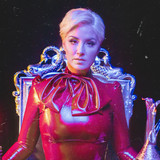 The third album from Maggie Rose, Have a Seat is the work of a phenomenally gifted artist showing the full extent of her power. After years of honing her chops and making her name as a force-of-nature vocalist, the Nashville-based artist has dreamed up her own unbridled collision of rock & roll, soul, folk, funk, and R&B: an eclectic sound for a musician whose live experience includes opening for Heart and Joan Jett, touring as direct support for Kelly Clarkson, and sharing the Cayamo Cruise bill with Emmylou Harris and Jason Isbell—all in 2019 alone. Centered on the stunning vocal command she’s revealed in taking the stage at The Grand Ole Opry over 80 times, Have a Seat finds Rose approaching her music with more confidence and clarity of vision than ever, ultimately sharing a selection of songs both timeless and urgent. Produced by Ben Tanner (Alabama Shakes) Have a Seat came to life at the iconic FAME Studios in Muscle Shoals, AL. Rose recorded live with a lineup of heavy-hitters that includes bassist David Hood of the Swampers (Aretha Franklin, Etta James) and guitarist Will McFarlane (Bonnie Raitt, Levon Helm), along with her longtime bandmates/collaborators Larry Florman, Alex Haddad and Sarah Tomek of Them Vibes. Also feat. an esteemed string section and swampy horn ensemble—in a way that’s never been so integral to Rose’s sonic aesthetic—Have a Seat continues the free-flowing musical exploration she first began on her powerhouse 2018 album Change the Whole Thing.