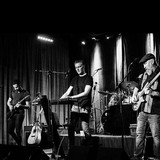 The Aaron Clift Experiment is a dynamic progressive rock band based in Austin, Texas. The group’s multi-faceted sound is an innovative blend of classic rock, modern rock, and classical all anchored by the band’s dedication to high-quality songwriting and musicianship. Formed in 2012 as the solo project of Aaron Clift, the band has since blossomed into a powerful live group enriched by the extensive musical background of its members. The soaring vocals of classically-trained singer and keyboardist, Aaron Clift, are grounded by the powerhouse guitar of Mathew Aboujaoude and rhythm section of

Clif Warren (bass) and Chase Ozment (drums). In the last few years, the band has carved out a significant worldwide following. Its last two albums, 2012’s “Lonely Hills,” and 2015’s “Outer Light, Inner Darkness,” were critically-acclaimed progressive rock achievements, landing on several year-end best album lists. In 2017, the band had a star-making performance at RosFest, one of the largest progressive rock festivals in the world. The Aaron Clift Experiment continues to move its dynamic sound forward in its new release, “If All Goes Wrong.” The album contains the band’s most diverse and electrifying music to date – songs full of enthralling melodies, masterful epics, and addictive pop hooks.