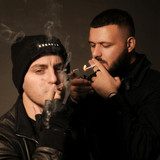 CryJaxx consists of Mario and Serafin, who are DJ & Producers from Tirana, Albania. They have more than 7 years of experience in Music Production. Excelled in EDM and working on different genres, they have managed to achieve recognition and success through their remixes and original tracks getting tens of millions of streams and a worldwide audience. CryJaxx also were featured on worldwide leading music channels such as Trap Nation, Lowly, Bass Nation, Trap City, and the Indie labels Tribal Trap & Magic Music. Counting more than 100 tracks released, Mario and Serafin have worked with major music labels from the USA, UK, Netherlands, Germany, Canada, etc. In 2018 they gathered more than 2 Million streams on Spotify and a total of 8 Million views on YouTube. In 2019 CryJaxx released 20 tracks and a music video, gathered around 13 million views on YouTube, 5 million streams on Spotify, and a few million on Apple Music. 2020 was a reflecting and hard-working year for the duo. They released 30 tracks and gained 8 Million streams on Spotify. CryJaxx’s first major appearance was in Albania – “Colour Day Festival” on the 18th of May. In September the duo went to China for their 2019 China Tour with 9 different shows in 9 different major Chinese cities. The boys also performed in the first-ever EDM festival in Albania called "Rage Of The Rampage".