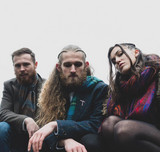 www.thetenmours.co.uk | Alex - singer, 23 | Aninka - violin, 23 | Adam - drummer, 23 | The Tenmours are british alternative band with roots in rock, folk, blues, film and world music. Formed in 2013, the band quickly began to make a name for themselves on the live music circuit. This culminated in the recording of their debut EP ‘A Poet’s Heart which was released under Lake District label Watermark-Music.   In 2017 they performed on numerous festival stages and with the likes of Jon Gomm, Shelagh McDonald and Colm Mac Com Iomaire, Maddy Prior, topped off with several of their own showcase concerts such as their sold-out show at Leeds College of Music.   In 2018 they successfully crowdfunded their second EP ‘Maze’ which was followed by a summer of gigs, concerts & festivals; notably performing on the main stage of Music on The Marr Festival.   With the release of their first music video ‘Maze’ and a spring tour in 2019, they notably performed at Grassington Festival and at Leeds Festival on the Alternative Stage accompanied by the Extinction Rebellion Orchestra.   As with much of the world - the band's 2020 plans; which include a first European tour; are on hold.   “Thanks for visiting our Spotify, we hope you find a connection with what we have to say. Thank you for your support, and we hope to meet you out on the road.”