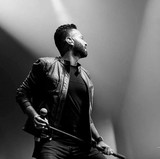 Katchaco (AKA Marcel Villamil) is a Colombian music producer, songwriter, singer and live act performer. He was born in the city of Bogotá D.C. and moved to the city of Medellín in the late 90s. He is well-recognised on the local scene as a vocalist for personal projects such as the Synth Wave band Sweet Machines, where he was the founder, composer, writer and co-producer of singles such as Take Me Higher, My World and Veil, among others. The 80’s rock & pop genres has always been prominent in shaping his vocal style.   At the beginning of 2018, he separated from his band Sweet Machines to explore a new musical direction and be seduced by the magic of the tropics and the fusion with electronic genres such as House, UK Bass, Trip Hop, Global Bass and Synth Wave, giving rise to a new stage as a producer and performer. His new direction seeks to fuse electronic sounds with the rhythms and sounds from Latin America, thus including his voice as part of live performances and new recordings on Rock and Progressive sounds