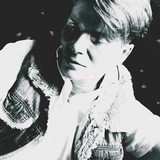 Chris Spruit, is a musician, songwriter with a passion for piano, poetry and singing. She discovered her passion for music as a child and that love continues unabated. Chris started out in the 80's as a singer with a cover band in Germany, doing about 150 gigs a year. After moving to England, she played in several bands, the most prolific being Rhythm Nation, which toured the UK in the early '90s. Then came the big blow: For a vocal cord operation Chris had to go back to Germany and it became quiet around Chris for a long time. But a life without music?! Chris read somewhere this sentence: *The world is better thanks to music and if it also makes you better when you make music, then you should do everything to be able to do it for the rest of your life!!!! She focused on songwriting. Careful practice slowly brought back the confidence she needed in her voice. Since 2015, she has been part of the blues rock band: Blue Attitude. A blues/rock project consisting of Dave Bell (Canada), Marty Straub (USA) and Christiane Spruit (Germany). Music connects! Crowd reviews: Such an interesting sound. It's like country pop with a classic sound mixed in, yet the lyrics are modern and the vocals are outstanding! It's a great blend and mix of styles, sounds and tones, which create an original sound which is rare and beautiful. I love the singers voice. I love the piano. I love the lyrics. There is nothing I dislike about this . * RVN 2020