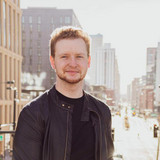 Sky Choice is a contemporary singer/songwriter with roots in Folk, Pop, Rock, and Blues. The multi-instrumentalist has performed on several tours, including a year-long expedition across the United States and Canada. With its humor, imagery, and lyrical complexity, Choice’s songwriting challenges modern music’s failings in depth and authenticity. Acoustic By Choice as a solo musician and the front man of The Sky Choice Band, Choice enjoys the variety of arrangements each song can yield. An EP and two albums down, Sky Choice looks forward to many more recordings, shows, and tours as his musical career unfolds.