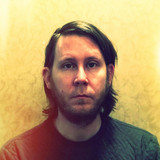 After a hasty exit from music school, East Tennessee's William Wright became widely known for his prolific songwriting, but continued composing music until finally landing in careers in both film music and traditional composition. Beyond his orchestral work, Wright is still working on constant short and feature-length film projects, and is still releasing albums as Senryu and as half of Peak Physique. Wright's internationally acclaimed chamber suite, Salt Mass, was released by Gezellig Records in June of 2018.