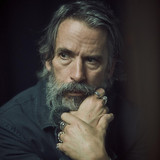 The British avant-garde composer and experimental artist Christopher James Chaplin studied piano in Vevey (Switzerland) before moving to London in the early 1980s. In 2009, he was invited by Michael Martinek and his label Fabrique Records to work with the artist Kava on "Seven Echoes“ – a concept album released and first presented live at the art brut museum gugging in Austria. There he met Roedelius, who later invited Chaplin to participate in a "Late Junction" live session for BBC Radio 3. The result of this second collaboration eventually led to another album – "King of Hearts". In the following years, Chaplin and Hans-Joachim Roedelius performed all over the world: mostly improvised performances with Roedelius on piano and electronics and Chaplin on synthesizers and orchestral samples.   In October 2016, Chaplin's acclaimed first solo album "Je suis le Ténébreux" was released – an artistic interpretation of Gérard de Nerval's poem of the same name and the "Enigma of Bologna". His second longplayer "Paradise Lost" (2018) translated John Milton's poem about the descent of fallen angels into hell into epic soundscapes. His latest solo work "M" (June 2020) is the final part of a trilogy, a multi-layered album about change and transformation. For this album he once more brought top-class guest artists into his studio. In April 2021 Chaplin will release "Jared", a second precursor to his new album project "Patriarchs" – it's based on the ten antediluvian Patriarchs.