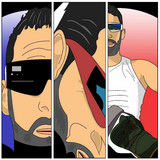 PAKITO has been created by Julien Ranouil and became a celebrity thanks to “Living On Video” one cover of TRANS-X which had been sold in 2006 more than 350 000 copies and had been #1 in France many weeks, after it PAKITO invades Europa then the whole world. The track reaches more than 14 millions views on Youtube. Thanks to this success, he releases the album «VIDEO» which been sold over 80 000 copies. «Are You Ready», «Moving On Stereo» are from this album and known also huge feedbacks. Forr the live, Julien being one man of Studio, prefered to create one tour with Manu (playing keyboard

and ambiancing the party) and dancers in 2006 directly after the success of «Living On Video» and he add Oliv Nilson in 2008 to be DJ. In 2012, Manu announce is retirement of the stage being exhausted of 6 years of tour non-stop. On May 2017, PAKITO released «Accordion» on the Robbie Rivera’s label JUICY MUSIC (distributed by ARMADA MUSIC) reaching a high score in whole Europa. In summer 2018, Julien Ranouil decides to stop to tour feeling that he prefers to stay in the Studio and ask to Oliv Nilson to be alone the live face of PAKITO. A lot of remixes and productions are ready to get out and the tour PAKITO keep on to travel under 2 ways : 100% PAKITO with all the standards and PAKITO DJ SET, mainly axed on a dj set including the new tracks. The story continues !!