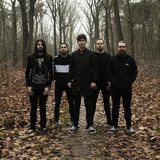 Changing Tides is a metal band from Noord-Brabant, The Netherlands. The band gets most of their inspiration and elements from the metalcore and deathcore genre. With well-balanced songs, combining strong riffs and deep breakdowns, they always get the crowd moving. In January 2018, they released their first single “Awareness”. The song received many positive reviews on social media platforms. In 2019, the band released another single named “Disgraceful” with a lyric video. The song got a lot of streams and positive feedback on platforms as Spotify and Youtube. The month after, they released their first and self-titled EP. The album got a lot of attention by magazines, E-zines, social media and a lot more. A few song are also included in major playlists on Spotify. In the 2020 the songs: "Pattern", "White Eyes" and "Guided" have been released. These songs are giving a new fresh look and taste of the music you can expect in the future.