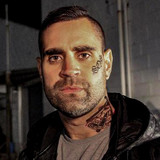 Rapper/actor/song writer Thibul Nettle aka Stinga T was born November 1st 1982 in Perth, Western Australia. He is an Aboriginal Australian of the Yamatji and Bibulman peoples with a background of Maori, Native American, Italian and Irish within his bloodline. He has an extensive range of experience in performing on stage as a solo MC and with former group TDB aka The Deadly Boyz, and also an actor for Film & theatre productions. In 2012, Stinga T was nominated for an Australian Indigenous BUMP Award for “Best Video”, and he won. In 2013 he is up for 3 awards as well as appearing as one of the headline acts. Nominations this year include “Best Male Artist”, “Best Single” and the “lyle-munro-urban-legend-Award”. Stinga has managed to keep up with his acting, playing lead roles in several feature films such as “The Counter Part”, “49”, “Alien Sons” and plenty more films to come in the near future. In 2013, Stinga T signed a worldwide publishing and recording agreement with indie powerhouse Blue Pie Records. “Stinga T is one of the most unique and talented artists I have seen in the past decade. It is incredible that he has developed his rap skills from Australia and I look forward to global success with Stinga T.” Oscar Ovaflow Clemons | Hip Hop Central TV