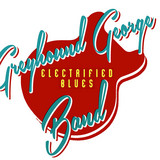 The year 2020 was good for nothing but writing blues songs, so George had a lot of time to come up with some very personal tunes. These are songs about lockdown, existential fear, overused relationships and party until it all comes down. Musically the album breaks the borders between blues, soul and jazz, between Chicago, Memphis, New Orleans and Bielefeld. The blues is often misunderstood as being a sad and depressive form of art. The opposite is true. Blues music has the power to heal even the worst cases of them low down blues! So now it´s time to get up and walk out again to make this music heard! Greyhound George was a finalist in the International Blues Challenge in Memphis in 2018. He was nominated for the German Blues Award several times and won the German Blues Challenge in 2017. The band consists of George´s faithful, tight rhythm section with Wolfgang Lohmann on bass and Detlev Schütte on drums, his old harmonica playing partner Andy Grünert, who also played on the band´s last album „Electrified“.Dieter Kozak plays organ and piano.