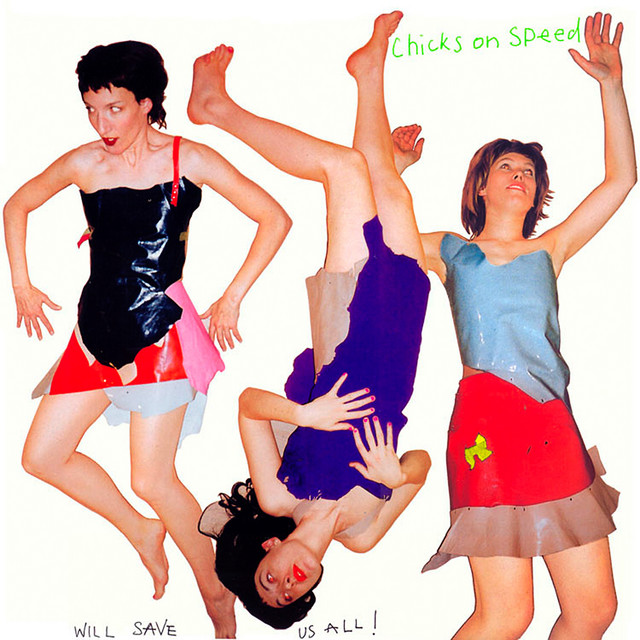 Munich's electronic pop/multimedia trio Chicks on Speed feature former New Yorker Melissa Logan, Australian Alex Murray-Leslie, and Munich native Kiki Moorse. Along with crafting deconstructed, feminist-leaning synth pop, the group also runs Go Records, Stop Records, and Chicks on Speed Records; designs video and print graphics and art installations; and makes and sells avant-garde paper and leather clothing. Appropriate to their arty vibe, Moorse, Logan, and Murray-Leslie met in 1997 at a bar near Munich's Art Academy. Soon after, they were releasing limited-edition, critically acclaimed singles such as Smash Metal, which pitted the group against Patrick Pulsinger, DMX Krew, and DJ Hell (whose album Munich Machine they also appeared on), as well as the ironic pseudo-house anthem "Glamour Girl." Their live shows ranged from appearances at 2000's Love Parade festival to touring with Console and Super Collider to gigs at renovated mental hospitals. Mid-2000 saw the release of their debut album, Will Save Us All!; later that year, the rarities collection The Re-Releases of the Un-Releases was issued by K Records in the U.S. Along with the release of several Will Save Us All! tracks as singles in 2000, Chicks on Speed stayed busy with the release of the Chix 52 EP -- an homage to the B-52's -- later that year. Chicks on Speed released more singles, including their 2001 collaboration with Kriedler and 2002's Fashion Rules, and also embarked on their first large-scale U.S. tour in 2002 as part of Larry Tee's Electroclash dates. In 2003, the We Don't Play Guitars single heralded the arrival of 99 Cents, which was released in Europe that year and in the U.S. with bonus remixes a year later. The trio collaborated with a Spanish group, the No Heads, on their next album, 2005's Press the Spacebar. Moorse left the band to concentrate on her own music the following year. A pair of singles, Art Rules and Super Surfer Girl, were released in 2007 and 2008 and appeared on the group's album Cutting the Edge the following year. Murray-Leslie and Logan returned in 2014 with Artstravaganza, which featured cameos by Yoko Ono and Julian Assange and featured some of their most ambitious material yet. ~ Heather Phares, Rovi