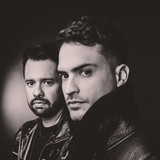 Coming from the south of Brazil, the music producer duo Matheus Rodrigues and Adriano Dub, aka Fancy Inc. Formed in 2014, they reached notoriety in 2019, an extremely prolific year for the duo due to the sequence of hits registered in Brazil. Starting with “My Girl” in partnership with Vintage Culture which reached Top 1 on the Beatport Dance Chart, following the single “In The Dark“ reached number 1 on the US Billboard Dance Chart and Double Platinum, ending this explosive year with “ Say My Name” with Bruno Be. Together these songs already total more than 50 million plays on digital platforms. In the same year, they were crowned with 1st Place Best Track 2019 by Eletro Vibez Awards and Highlights of the Year 2019 by Cool Magazine. Climbing the charts and having support from the main players in the market, Fancy Inc became a reference in the scene for popularizing the Progressive House in Brazil. Precursors of a new sound, owners of a striking identity, it's impossible not to recognize the duo when listening. Which led to invitations to remix David Guetta (Warner Bros), Becky Hill (Universal Music), Joel Correy & MNEK (Atlantic Records) and Robin Schulz (Warner Bros) to name a few. Working with the biggest labels in the world, in 2021 they released their new single “Free” in partnership with Vintage Culture and Roland Clark, the track reached in less than 2 weeks Top 1 Overall on Beatport, the main electronic music chart in the world.