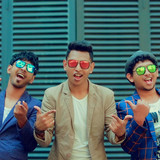 Funky Dirt is a 3 member Sri Lankan pop group from Colombo, the city by the sea. formed back in 2007 by Mura Shenal & Ridzy a collection of fun loving, wild, imaginative, creative, and mad brilliant group of 3 best friends who met at their school, Isipathana College Colombo. Funky Dirt’s unique brand of entertainment fuses funky and fun with outgoing and crazy ideas that will make you want to dance to their tunes all night and watch their music videos over and over again. Their first hit music video ‘Ada Ape Thaththa’ amassed over million views on YouTube in a short span of time and received airtime in various tv and radio stations which made them a household name in Sri Lanka. The unbelievable success of Ada Ape Thaththa made them win awards such as Best New Artist, Upcoming Hot n Spicy video (Ada Ape Thaththa) and Best Online Music Video (Bus eke) at Derana Music Video Awards and propelled them to much bigger stardom than they ever imagined. Funky Dirt has now attracted over 100,000 YouTube subscribers on their official channel with millions of views of their hit music videos across the platform. For updates, you can follow the band on social media - Funky Dirt on Facebook, Funky Dirt official on Twitter, and Funky Dirt on Instagram , tiktok and all other streaming platforms such as Spotify and Apple Music. Funky Dirt. We do get dirt, we do play funk!