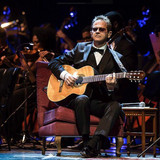 With a consolidated career in Brazil and abroad as a musician, singer and songwriter, Edinho Santa Cruz is known for being the author of several soundtracks for soap operas by Rede Globo. He has performed in several television programs and in events of major companies. His experience of playing live, his professionalism and interactivity with the audience resulted in the invitation of Fausto Silva to be part of the program Domingão do Faustão ahead of his band, as musical director, where he remained for four years. Currently, Edinho Santa Cruz presents his projects: Na Estrada do Rock in Concert (On the Road of Rock in Concert) and Jogo do Silêncio (Game of Silence).