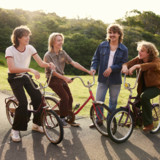 From their origins at a school talent quest to amassing over 700,000 streams on Spotify with debut singles ‘Sadie’, ‘Halfway Out’ and 'Head Still Hurts', The Rions (like Lions) have once again teamed up with Producer Callum Howell (Ocean Alley) for their new single ‘Night Light’. The 4 teenagers from Sydney’s Northern Beaches have their mind set on changing the world with their music, and they seem to be on the right path judging by the fan frenzy on socials and triple j Unearthed (*just announced as Unearthed High Finalists!). Under the guidance of music teacher Mr John Stone (Angus & Julia Stone’s father) they started performing in their local area at the age of 13 and have ventured through a multitude of genres currently citing Arctic Monkeys, Lime Cordiale, Spacey Jane and Dayglow as their biggest influences. At just 17 years old, their natural talent and hard work has helped them create a loyal following, recently winning a spot in the Bluesfest Busking Comp Grand Final, taking out the Northern Composure Audience Choice award and securing gigs across Australia’s East Coast. Since entering in triple j Unearthed High in 2020, they scored airplay on Unearthed Radio and caught the attention of reviewers at the station. After just a few months on TikTok, frontman Noah Blockley amassed over 6 million views, translating to a growing global following for the band online. Keep an eye out for more new music and shows in the works for 2021.