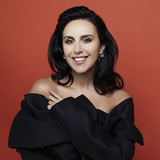 Susana Jamaladinova, better known by her stage name Jamala, is a Ukrainian singer/songwriter and actress who found international success in 2016 after winning that year's Eurovision Song Contest. Born in 1983 to a Crimean Tatar father and an Armenian mother, Jamaladinova began singing at the age of nine. She graduated from the Petro Tchaikovsky National Music Academy of Ukraine, where she studied opera, but it was pop music that would prove to be her real calling. In 2010, she released the first of a flurry of singles. Her first studio album, For Every Heart, dropped in 2011, followed by All or Nothing in 2013, and Подих in 2015. The following year saw Jamaladinova representing Ukraine in the Eurovision competition, where she performed the politically charged song "1944," which was inspired by her great-grandmother, who lost her daughter during the deportation of the Crimean Tatars. Upon winning the contest, Jamaladinova was given the People's Artist of Ukraine award by Ukraine president Petro Poroshenko. ~ James Christopher Monger, Rovi